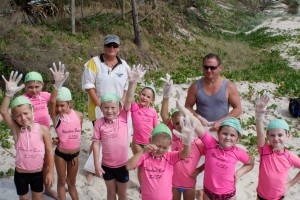 The Rainbow Beach community has put in an excellent effort for Clean Up Australia Day 2014. Under sunny skies, the clean-up took place throughout local streets, parks and beachfront and also along Rainbow Beach Rd, Freshwater Rd, Teewah Beach and Inskip Peninsula.

“This is a fantastic effort for our environment and community, and a big thank-you goes out to all involved – participants on the day, sponsors and organisers,” Mr Lawton said.

“Three groups of participants from the Cooloola 4WD Club, the Alpha Phi Omega fraternity from The Philippines and Peter White’s group of campers, totalled 46 volunteers who cleaned up at Inskip over the weekend.  This was in addition to 18 dedicated volunteers from Rainbow Beach.

“Thanks also to our QPWS rangers who participate in the clean up each year and also help to promote and organise the day along with Gympie Shire Council,” Mr Lawton said.

Clean Up Australia Day was a great success; with 24 persons joining us, we divided into groups or teams and cleared the main Bayside Road from Endeavour Drive to Scullett Drive and then in the opposite direction to the Cooloola Cove Shopping Centre.

One team stayed in Billabong Park and after clearing and making some interesting finds they were invited to take a cup of tea by Rod Robertson of the Real Estate office.  Thanks very much, Rod, from all the guys! Other individuals cleared roadsides in the immediate area of Centenary of Federation Park where we arranged to meet, Endurance Avenue, Tom Thumb Court, and Mauretania Avenue. 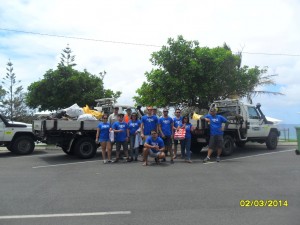 We also had a good look around the Park but it has been very well cared for by other members of our organisation and members of the general public using it regularly.  The BBQ was also enjoyed with contributions from our bakery and free drinks.

Thanks to all the people who gave a few hours of their time on Sunday 2nd March to make Cooloola Cove an even more pleasant place to live.

Clean Up Australia Day is an annual nation-wide event on the first Sunday of March. Over the last 24 years, organisers estimate that over 200,000 tonnes of rubbish has been cleaned up, and over 24 million volunteer hours have been devoted to the cause.

Clean Up Australia Day aims to promote awareness and inspire people to be mindful of waste and pollution on every other day of the year and to “Reduce, Re-use and Recycle”.

Reduce: Reduce waste – Look for ways to produce and use goods that stop waste being generated and choose products that can be used productively, recycled locally, and have minimal packaging.

Re-use: Re-use containers, packaging or other products where possible and help to remove the ‘use once and throw away’ practice.

Recycle: Recycle waste material into useable products by always try use a recycling bin for disposal of glass, plastic bottles and cans.