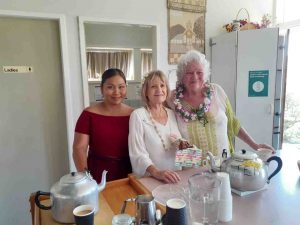 Neza Paye, Margaret Cudahy and Sabine Deimel providing the ‘cuppas’ at the World Day of Prayer

World Day of Prayer for the people of Vanuatu was celebrated at the Good Shepherd Church Rainbow Beach, one of 180 centres just around Queensland.

The world-wide service was prepared by the women of Vanuatu with the theme ‘Build on a strong foundation’.

It was a wonderful occasion of ecumenical fellowship with 41 people from seven churches of the Cooloola Coast participating.

Chappy Ronnie brought five of the student leaders from the Rainbow Beach School, with Skye and Charlotte speaking on Vanuatu during the service.

James had the honour of cutting the special cake, made by Rainbow’s much-talented Ann Thornton, which depicted in icing the beautiful artwork on the front of the service booklets.

The offering from the people attending and also some generous contributions from Cooloola churches led to a total of $1000 being forwarded to support the much-needed ‘Trauma Healing and Literacy Project’ for women in Vanuatu.

Each year, World Day of Prayer is such a wonderful opportunity for all Christians to come together, putting aside their denominational differences, and the success of our day was evident in the joy and smiles of those interacting on the day. Thank you to all who made it such a great occasion.