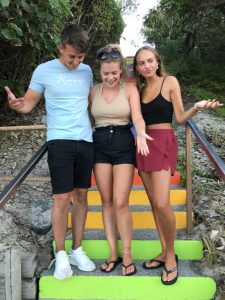 UK travellers, Elliot Pitt, Lauren Witherspoon and Hannah Earle visited the rainbow steps and want to know where are the words “How good is living”

Walking to the lookout, the dog and I came across three puzzled looking backpackers.

I asked if I could help.

“We are looking for the words?” said one.

“How good is living?” said another.

“Have you found the rainbow steps?” I queried.

“Yes, but they are not there – is there another rainbow? Our friend had his photo with the word a couple of days ago?”

That’s when the penny dropped.

These were three young people from England. They hadn’t heard of Carlo Sandblow, our Coloured Sands or our other beauties. They could have taken that photo with the rainbow, but it was the words they wanted their photo with!

They asked me why? Why would someone remove the words? I was embarrassed to explain.

After months of a stand-off, the words were removed. Since then they were back on again and I hesitate to say what the status is at the moment.

Sam Mitchell from Rainbow Beach Tourist Information Centre says that tourists don’t see the words as an issue. Sam says they do see it as ludicrous that there is a dispute.

The store receives many enquiries for directions to the steps. “They come and say ’the words are gone’ and ‘where are the words?’’ he said.

Check out the top Instagram photos for #rainbowbeach – 6 out of 9 of the TOP photos were the rainbow steps and words. I believe the words and rainbow are part of Rainbow Beach.

So much so, Sam and his wife Maureen saw the opportunity and created their own “How good is living” merchandise. Why?

“Because the tourists love and want it.”

In the meantime – people are not only taking photos, but also souvenirs.

“I’ve sold a heap of stubby holders – they also stock key-rings, stickers and magnets. Shot glasses and T-shirts are on their way.”

His bash vehicle now sports the brand as well, Sam thought that would be a good thing to bring to his 20th Variety Bash next year.

This year, he’s taking his beach buggy – it leaves Mackay at the end of August, and finishes at the Gold Coast. About 400 ‘Bashers’ will have an R&R day in Rainbow Beach, September 1-2.

I wonder where the words “How good is living” will be in September?

His message to Council is : “If it is removed, the general public won’t be happy.”