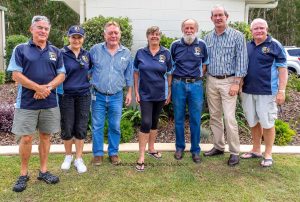 Over the last couple of months the fishing has been generally good with excellent catches of mangrove jack from most of our creek systems.

Jacks are thought to be mainly a night time capture on live bait, but there have been numerous fish caught lately during daylight hours and on various flesh baits and quite a few on yabbies.

A few grunter have also been caught while targeting Jacks. The only downside to Jack fishing is where they are caught the sand flies are also present in huge numbers.

There were good numbers of a variety of species submitted for the monthly comp which ran over December / January.

There was a 36cm whiting caught early in December and a 5cm Mangrove Jack only to be beaten by a 41cm whiting. Then there was a 56cm Mangrove Jack which is a cracker fish, but on calculating the points the mega whiting at 41cm, caught by new member Tony Punch, won the December/January comp. There have been some quality fish already submitted for the February comp.

There have been some good recent inside catches of reef species such as cod, sweetlip and slatey bream by those who work the tides and put in a bit of effort.

The tax man has been present lately with occasional quality fish such as cod and sweetlip being bitten in half on the way up.The sharks appear to be of the misconception that slatey bream is not a good eating fish.

There has been a few quality summer whiting caught lately but generally whiting, bream and flathead have been fairly elusive.  A few squid have also appeared and are hungry.

Mud crabs have been around in good numbers for the last couple of months with some of excellent quality.

The Vice President of the Tin Can Bay Fishing Club, Ron Cox, and club members extended a very big welcome to Mayor Mick Curran and Cr Mark McDonald to the Tin Can Bay Club house.

The Club Vice President, Ron Cox, thanked Mayor Curran and the Gympie Regional Council for the ongoing support and funding that has been provided to our club by the Facilities Grant programme.

Club members also thanked the Mayor and conveyed their appreciation for having received a funding grant of $2,500 from the Gympie Regional Council that was used to provide a concrete driveway and off-road parking for persons with a disability.

The new apron and driveway will also facilitate wheelchair access to the club building.

Ron Cox also mentioned that, “the club members are very actively engaged in supporting our community and other community organisations”.

The Executive Committee will be coordinating the Clean Up Australia Day Event in Tin Can Bay in March and will be also holding two Kids Junior Fishing training days which have been sponsored by Sunfish Queensland and the Gympie Regional Council.

“Holding these community events is only made possible by the assistance that we receive from our valued sponsors and once again we thank the Gympie Council for their ongoing support,” said Ron Cox.

Mayor Mick Curran thanked the members for inviting both Mark McDonald and himself to the morning’s event. He mentioned that the club was very proactive in supporting a number of local volunteer groups and was held in high regard by the community.

He further stated that giving to and assisting other community groups is really essential in small communities and the Tin Can Bay Fishing Club excelled in this regard. All present enjoyed a wonderful morning tea provided by the club’s ladies.

Next General Meeting will be held at 4pm on Wednesday April 17 at our Club House, 33 Dolphin Ave, Tin Can Bay. Contact the secretary on: 0437 242-171 or email:  tcbfishingclub@bigpond.com. All welcome.