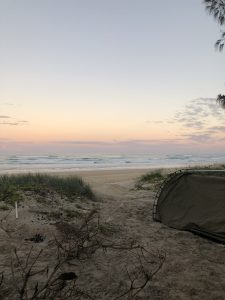 Member for Gympie, Tony Perrett, has slammed the government over the permit fiasco impacting tourists and local businesses of the Cooloola Coast.

He said: “The Cooloola Coast is being severely impacted by the debacle caused by chaotic and contradictory announcements about lifting Covid-19 restrictions.

“Residents are now concerned that the reluctance to open the area up to increased camping and beach driving is a backdoor attempt to impose further restrictions on the region.

He said: “In the last two weeks we have had visitors turned away because they were met with barrier tape and told camping was not on. It was changed a day later, but there was an additional special permit needed. Then we discovered it was capped at 20 visitors when Inskip can cater for 2,300.

“Locals who have a beach driving exemption have to apply for the extra permit and day trippers and non-campers are making block bookings. Permits are only available online, when previously they could be obtained at the service station and QPWS office which is often closed.

“Ten days ago, the website showed camping at Inskip was capped at 200 and then within the next two hours it had increased to 760. That increase was short lived.

“Everyone’s hopes were dashed when a few days later we were told it was a clerical error and changed back.”

He said the same weekend 10,000 people could attend stadiums, but people cannot camp in an area where capacity is 2,300.