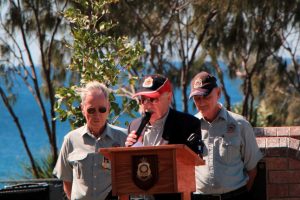 “Remember the dead and fight like hell for the living”

11am August 18, 2017, at the town’s Cenotaph, a group of about 30-plus gather to honour, mourn and remember the soldiers that served in one of the most controversial wars Australia has ever been involved in.

The service was an emotional and factual memoir from Joe Casey, President of the RSL sub-branch.

It moved myself and many others that attended, including the four Vietnam Vets standing proudly in the crowd. Even though the number of attendees was respectable, I found it a sad indication of the way these brave men and women have been treated since the beginning of Australia’s involvement in 1962, when comparing numbers at Anzac Day Ceremonies.

Local Vets include Terry Comini -6th Battalion Army (1966), Joe Casey Medical Corp Army (1970-71) and Padre Bruce Dorman (1968) Rifleman Army. Each was what was referred to as a “Nasho’s”, men who were conscripted and sent to Vietnam.

Terry Comini was blown up by a claymore mine and suffered severe head and leg injuries and still served his two years National Service. “It didn’t matter if you were injured or not you still had to do your two years,” exclaimed Terry.

Another Vet in attendance was Dennis Stallard 21EST Squadron (1969-70) from Charlestown NSW, who was attending with wife Sue. They have attended several Vietnam Vet Days in Rainbow, “We enjoy the simplicity of the service, it was lovely today!” stated Dennis.

As Joe Casey said in his monologue of the years over there, “The mateship was great, the fear was real, the music was loud and emotions ran high….we proudly did our duty for our country but the politics sucked!”

As I looked around at the brave guys that fought the war nobody wanted, I was struck by the fact that they are just normal guys who, thrown in at the deep end, did an amazingly brave and heroic job.

We should all thank them and stand proudly by their sides.