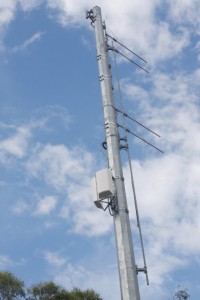 “Yes, the transmitting aerial has been shifted further down the tower”

When are we going to get decent, continuous TV reception in Rainbow Beach?

Are you like us who cheered when we saw the tower going in for TV reception for the digital transmission? At last, we were being rewarded for all our hard campaigning before the switch over to all digital TV reception. For nearly two years, we had brilliant TV reception. And now, are you like us who are utterly disgusted with the service we have been forced to accept?

At the time of writing this article, I am still waiting for the TV reception to come back on after our second power outage in three days. After Sunday’s outage, it took more than 30 hours to restore the TV transmission. Peter Grant, who spoke to the technician as he was fixing it, was told that it was the battery backup that had failed. Is that what we are doomed to every time there is a power failure? Summer storms haven’t even hit properly yet!

We are so disgusted with the service that I sent off an email to the technician we have been corresponding with, as well as Warren Truss’s office and WIN TV who own the tower. Hopefully, we will get a response.

Over the Christmas period, we received an email from Ray Contreras, senior engineer for the Australian Communications and Media Authority (ACMA). He explained that yes, the transmitting aerial on the tower has been shifted further down the tower but that was necessary as…

“to avoid feedback they need to have a large amount of vertical separation between their receiving and transmitting antennas. The re-engineering of the antenna configuration at Rainbow Beach was to improve the reliability of the input signal whilst still maintaining good coverage to the intended coverage area.”

From our questioning of those who are now suffering from poorer reception since the change in October, his statement about “maintaining good coverage to the intended coverage area“ is far from accurate. And, if you live in Rainbow Shores, I’m sure you will find his next statement deplorable:

“the area around Rainbow Shores Drive has always been outside the intended coverage area of the Rainbow Beach transmission site.”

Since when was Rainbow Shores not a part of Rainbow Beach town? Mr Contreras, you have a lot of questions to answer from this part of Rainbow Beach (about one third of the town). In Mr Contreras’s defence, he has replied to our email as well as to a resident of Rainbow Shores who also sent him an email. It is only a brief email to acknowledge receipt of our correspondence and to tell us that a full response will be forthcoming.

I believe in the old adage “The squeaky door gets the most oil”. This issue is not finished. If you would like to add to our knowledge of TV reception around Rainbow Beach, please feel free to email me with your experiences at sales@saturnantennas.com.au or call us on 07 5486 3471.