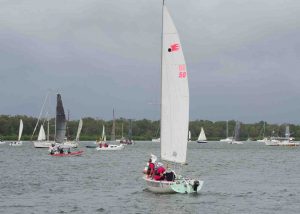 By the Tin Can Bay Yacht Club

Wet, wet, wet wasn’t just a rock band from the ‘80s, it was the Saturday morning of the Bay to Bay.

It had rained all night and continued to do so until an hour or so before the start of the race when, thankfully, the rain cleared and an adequate breeze sprang up.

The grounds of the Yacht Club were flooded and dozens of soggy sailors had to wade through a lake to the registration desk, before wading through salty water to get to their anchored boats.

Some crew were lucky to keep dry feet by being in the marina, but several boats were discovered to have leaks that previously were not known about. Still, sailing is a water sport and you expect to get wet at some stage.

About 130 boats entered the race, hoisting spinnakers just after the start, providing a spectacular sight. Most spinnakers hoisted easily, however others were doing a choice of 101 things that spinnakers can do.

‘Cheers Everybody’, a Blaze 23, was the only entrant from TCBYC and it was cheers all around as the crew came first in their fleet, first in their division and second overall. Cheers!