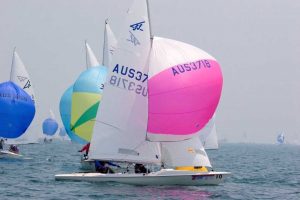 Race days this month have seen the strong southeasters abate to 10-to-15 knots which put a bit more fun back in the day’s sailing, particularly for the smaller dinghies.

Handicap honours in races 5 and 6 was a two boat affair, with Billy the Kid taking the flag closely followed by the girls on Topaz.

In race 6 Topaz took the flag from Billy the Kid and again in race 7 from FAB, aptly skippered by Maree Prior. Race 8 was keenly contested between FAB and a late charge from Final Fling.

The 8-race Series 4 was by Michelle McAndrew and Hilary Axtel on Topaz with Harley Jackman sneaking into second place in Harlequin. Summer racing has now concluded with boats and crews taking a short break before the John Moffat sponsored Cooloola Cup over May 7 and 8, and the winter sprint series during July and August.