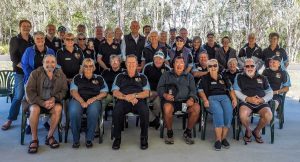 The opening ceremony for the new Tin Can Bay Fishing Club outdoor barbecue and gazebo area was recently celebrated, with our local Member Tony Perrett MLA (Shadow Minister for Agriculture, Fisheries and Forestry) as honoured guest.

Tony has been an avid supporter of all recreational activities in our local area, and we wish to publicly thank him for his dedication and support.

Our thanks go also to Councillor Glen Hartwig, Mayor of Gympie for his ongoing support of our club and its facilities – not just for local fishos, but a resource for the community to use and  enjoy, now and into the future.

Now…down to the seriously fun business of fishing…

The warmer weather and water temperature means a few mangrove jack are on the chew in the creeks, taking fresh flesh-baits as well as live baits and a variety of lures. Try to cast as close as possible to the mangrove roots and structure. Periods of low-light (early morning or late afternoon and into the night) are the favoured feeding times for these maroon marauders.

Mud crabs are now on the move with the warmer stormy weather. It’s the perfect time to have a few bob each-way by dropping a (properly rigged) crab pot or two up the creek while you are there trying to land a mangrove jack.

For those who are new to mud crabbing, it’s important to remember that you must have your name and address on both the pot and float. Queensland law states you are allowed four pots per person, and 10 male crabs PER PERSON IN POSSESSION. It is not 10 crabs per day (and it’s illegal to take female mud crabs i.e “jennies” in Queensland). Minimum take size on male mud crabs is 15cm.

There have been some good catches of summer whiting by those who pump some yabbies and fish the shallow sandbanks on the bigger rising tides. Fishing a rising tide after dark around the full moon can also be a super-productive option for catching bigger whiting.

When they can be found, flathead have been readily pouncing on both small hard-bodied lures and soft plastics cast into their usual feeding spots in the gutters and on the drop offs of the sand banks, preferably in the early morning before the boating traffic.

There have been some quality fish including cod, tusk fish, tuna, and the occasional kingfish caught on the reefy areas in the bay and the reef fishing should continue to improve with the warmer weather.

The fishermen who plan how, when and where to catch what according to the tides and weather are the ones who seem to be successful. In saying that, take whatever opportunity you can to get out onto the water and have a try.