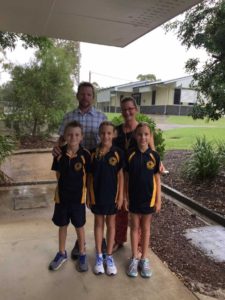 Danny and wife Christine are not strangers to Rainbow Beach. Danny started his teaching career at Rainbow Beach State School in 2001, holding a contract for the 5/6 class.

Danny’s wife, Christine, is also a teacher and is currently teaching part-time in the 2/3 combined class at Rainbow Beach State School.

“I met Christine while she was visiting Mick and Annette Hempenstall one holiday. Christine got a transfer to Rainbow Beach from Ipswich and she taught the 5/6 class,” said Danny.

Danny and Christine were married while living and teaching in Rainbow Beach and soon after, their twins, Ava and Meckenzie were born, followed by son Jonah.

“We moved away from Rainbow Beach to the Sunshine Coast to be closer to family and further my career,” said Danny.

Danny said, “The Coolum State School Principal, Pat Cavanagh, was very supportive of my ambition to become a principal and he encouraged me to take up some leadership roles.”

After working at Coolum State School, Danny took a 12-month contract at a tiny school called Givelda, located between Bundaberg and Gin Gin. There were 18 students from prep to grade six, including Danny and Christine’s three children.

“Working at Givelda was a great experience for our family but we returned to the Sunshine Coast when I was offered a job as deputy principal in a larger school,” said Danny.

Danny said, “I am really enjoying working at Rainbow Beach State School and my children are loving the smaller school environment and the close-knit, family feel it has.”