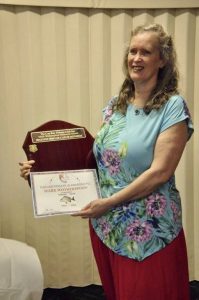 Margie receiving the trophy for Biggest Bream on behalf of her late husband, Mark Wotherspoon. Mark was a very much loved and respected member of the TCBFC who passed away suddenly last year

Nannygai, sweetlip and cod are being caught

With the great weather over the Christmas/New Year period there has been a lot of boating traffic throughout the bay and outside the bar, but now the silly season is coming to a close the boating activity should slow down.

The ledges and reef areas in the bay and up the straights have been fishing well with Nannygai, sweetlip, cod to 10kg and Tusk fish to 8kg being caught lately by those being at the right place and at the right time of the tide having the best results.

Summer whiting, bream and flathead have become a bit elusive lately but now the boating traffic is slowing a bit they may come out of hiding.

There are reports of a few Barra being hooked and a couple being landed, photographed and released as it is currently closed season, at the time of writing. Barra Season opens Feb 1.

Mud crabs don’t seem to be as prolific as they were this time last year, but maybe they are waiting until the holiday makers go home before they make an appearance.

Mangrove Jack have become fairly active with the warmer water temperatures, and good catches are being reported from most of the creek systems throughout the bay and up the straights.

Fresh flesh baits, live baits and lures cast tightly to the snags are getting the desired response from these aggressive fighters, with the first few seconds of the battle indicating whether the fish or the angler is to be the winner. Talk to the staff at the TCB Chandlery for ideas and options for lures.

There are a lot of turtles and quite a few dugong around, plus our resident dolphins and they can pop up anywhere, any time, so please be aware while under way and be ready to take evasive action.

The next General Meeting will be held at 4pm on Wednesday February 19 at our Club House, 33 Dolphin Ave, Tin Can Bay. All welcome. Contact the Secretary on 0437 242-171 or email:  tcbfishingclub@bigpond.com