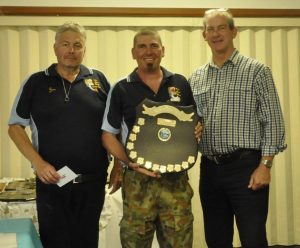 The Tin Can Bay Fishing Club held its Annual Awards Presentation Day and Christmas Party at the Tin Can Bay Country Club on Saturday November 30 and all 65 attendees had a very enjoyable afternoon.

Our special thanks for their attendance and ongoing support goes to Mayor Mick Curran and his wife Sue, plus Councillor Mark McDonald and Tony and Dianne Heiduk and to our many supporters and sponsors who assisted with prizes on the day, namely Chandlery Bait and Tackle Tin Can Bay, Harvey Norman Gympie, BCF Gympie, Cooloola Mitre 10, Bunnings Gympie and Woolworths Cooloola Cove.

The hot northerly winds have made life a bit uncomfortable recently but those who have braved the weather and gone out fishing early in the mornings or on dusk have been rewarded with good catches of quality mangrove jack.

Fishing the incoming tide seems to be getting the best results using flesh or live baits. There have been a few Grunter caught recently. The numbers seem to be increasing and their places of capture seem to be widespread, indicating that the numbers in the local area are greater than they have been in recent years.

Grunter can be caught on various baits and one of their favourite snacks is large peeled green prawns, plus lure fishing with a variety of soft plastics can be rewarding.

The reef areas and the ledges have been producing reasonable numbers of quality fish including Grass sweetlip, Nannygai, Slatey bream and Tusk fish. Fishing these areas on the neap tides seems to be more successful in giving more time to find the fish, in the time of slack water between the periods of tidal run.

The grey overcoats have been taxing a few and there are a few leopard sharks being a bit of a pest but good to have a look at as well as testing your gear.

Whiting and flathead seem to have become elusive lately but it could be that other species are being targeted while the opportunity is there. There have been a few mud crabs caught recently but they are a bit hit and miss. Secretary 0437 242-171.

A certificate and redeemable voucher was presented with each shield

A certificate and redeemable voucher was presented to each winner