Home  »  Community   »   Thanks all around from the Tin Can Bay RSL 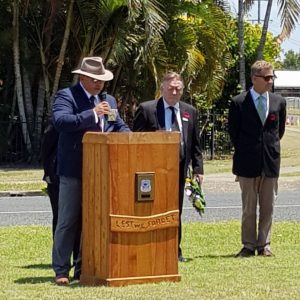 This year has gone by so quickly and now it is nearly Christmas and New Year is not so far away.

Firstly, I would like to include a big thank you from one of our members whose camera evidence was used after the accident at Bayside and Tin Can Bay Rd on November 11, 2019.

He and the local police would like to thank the staff from the Army (Royal Military College Duntroon) who were in the area conducting final assessment of our future leaders. The staff were first on the scene and took charge of the accident until emergency services arrived.

Thank you to the Cadre staff and their professional and highly trained staff for being in location.

This incident was on Remembrance Day and the Sub Branch would like to thank all those who were present at the service, including members of RMC Duntroon who also attended. It was good to see such a local turnout.

At the Sub Branch we had a good, if not busy month with Melbourne Cup Day quite successful but a disappointment for some with the protest on the cup. Well, we will try again next year, hope you picked a winner and had a good time.

Our Veteran and Community morning teas have been going well and the next one on December 10 is our last for the year and is Christmas themed, so get your tinsel on and come along, starts at 10am again with Laurence performing.

On Saturday December 7 we will be having our Christmas Dance, $5 entry with proceeds going to charity. Mike and friends will be performing so come along and enjoy. We will be cooking hamburgers, so you can have dinner before you start.

On Saturday December 21, the Christmas Raffle will be drawn, again we have Karaoke Keith performing for the afternoon, some snacks on offer and hopefully you will get lucky with a raffle.

With Christmas Day being on a Wednesday, the bar will not be open, and not on Boxing Day either.

Our BBQs will be on all the way through December, but nothing will beat the November 10, when we had the Army come through while they were conducting their open day. Kept us busy but we managed and had a very successful day.

On that note, I and the other committee members would like to thank all those that have supported the Sub Branch over the past year and we hope you all have a great Christmas and an even better new year.