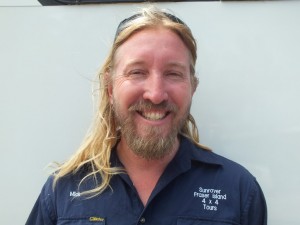 Unfortunately our coastline has seen a few rescues this summer, and it was thanks to the lifeguards, visiting lifesavers and some locals, that lives were saved.

Mick Findlater was driving his Fraser 4×4 tour bus on his way home to Rainbow Beach, “As I approached Dilli beach a lady frantically waved me down.”

“She informed me that her 69-year-old father had gone for a swim and they couldn’t see him any more.”

Mick had some lifesavers on board the bus holidaying from around Queensland. From the bus they could see the man and the lady’s husband looking for him.

They swam out, retrieving the man and his son in law, then helped carry the deceased man to the shore and lifesavers performed CPR. Mick said the first responders, the ambulance and rescue helicopter, were quick to respond.

“It was the third drowning I have had to deal with at Fraser. Please don’t swim on unpatrolled beaches as we have very strong currents. There is no reason to risk your life when we have such wonderful lakes and creeks to swim in.” 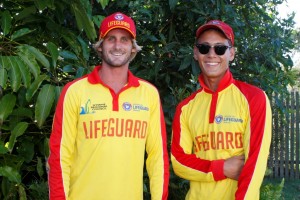 Further south, a NPWS ranger on duty was the first responder when a man fell unconscious whilst swimming at Double Island Point these holidays. The Community News was told the man had experienced a heart attack in the shallow water.

Lifeguards, Sam Cartwright and Reece Muir, arrived at the scene and brought him back to life with the defibrillator.

Sam said, “The service always puts a couple of guards at the point during the holidays. It was lucky we were that side of the point at the time.”

The roving service performed other rescues whilst on their travels, they remind all beachgoers to:

1. Swim between the red and yellow flags
2. Look for, and follow the advice of, safety signs
3. Ask a lifesaver or lifeguard for advice
4. Swim with a friend
5. Stick your hand up for help
6. Don’t swim at unpatrolled beaches
7. Don’t swim at night or after drinking alcohol