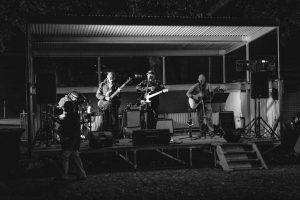 “Sneeky Pete” is a Gympie covers band, having played throughout South East Queensland for the last 30 years.

They’ve entertained at many venues and functions from pubs, clubs, formal balls and major events to countless weddings and private parties. The Sneeky Pete Band play a wide range of styles and genres of music, built around a solid base of classic hits. They also focus on keeping things fresh by including selected songs by current artists.

Some band members have come and gone over time, but the engine room of Mr Noel Prowd on drums and Bob Tryhorn on bass, has provided that constant heartbeat and groove. The last few years have seen John “The Pom” Watson on Tenor Sax add a new dimension to the band’s sound.

Putting the icing on this musical cake is the fact that all four members alternate taking the lead vocal on songs and carefully arranged harmonies add yet another level to their performances. Several songs even feature the full complement of four-part vocal harmonies!

See this four-piece band, playing well-known favourites from the 60s to now, Friday March 1 at the Tin Can Bay Country Club.