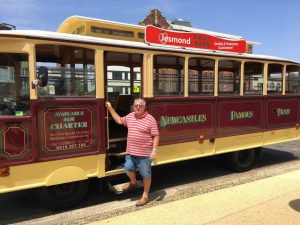 One of my hobbies is history. Whether it is family history or the history of places, I’m hooked. So this year, we have decided to do a History Trail around Australia.

Our first show for the year was at Newcastle. What a great place to start the History Trail. The area was first discovered by Lt. John Shortland in 1797 while looking for escaped convicts. He reported to Gov Hunter that he had found “a very fine coal river” with a great potential for a deep-water port.

It wasn’t till 1804 that a town was established with convicts digging the coal to be sent to Sydney by ship. From this harsh beginning, the city of Newcastle has grown into an industrial hub.

We took a ‘tram’ tour around some of the highlights close to the coast and port of this historic city. The part of the tour I loved was the Anzac Memorial Lookout Walk on the the Strezlecki Headland.

As a remembrance, in 2015, for the 100th anniversary of Gallipoli, the Newcastle council, along with some major organisations, had a walk constructed along the cliff with steel reliefs of soldiers with the names of men and women from the Hunter region who enlisted in World War I. It is a beautiful place for reflection.

Our stay in Newcastle for the caravan and camping show was followed by a mad dash to Adelaide for the next show the following weekend. On the way, we were able to trial the satellite phone that we have recently added to our catalogue of products for the caravanner.

We have been asked on a number of occasions at shows about accessing the internet via satellite. After some extensive research, we have decided to go the satellite phone way with the Optus SatSleeve.

This device allows you to use your ‘smartphone’ as a satellite phone. Then you can make calls, send texts and access the internet from anywhere in Australia. Across the Hay Plain, we called the office when we had no phone reception from our normal phone carrier.

We chose the Optus satellite phone solution for a number of reasons. One of them was the fact that that we were not tied into a plan that you have to pay for all the time.

The satellite account with Optus can be put on hold at any time that it is not needed and reinstated without paying a fee. To read more about the Optus Satsleeve, go to our website www.saturnantennas.com.au or give us a call on 07 5486 3471.