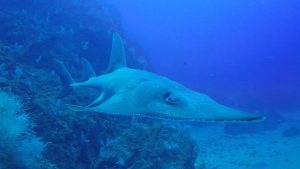 Did you know Wolf Rock is the only known aggregation site for the critically endangered pregnant Grey Nurse sharks?

However, Grey Nurses are not the only endangered marine creatures living around Wolf Rock. The IUCN’s Red List of Threatened Species rates all six giant Guitar Sharks as critically endangered. A type of shovelnose ray, Guitar Sharks can be found at Wolf Rock, resting amongst the boulders.

Overfishing of this species has caused the population to decrease by 80% over the last 35-40 years. Luckily, they can find sanctuary in Wolf Rock, with the 1.5-kilometre exclusion zone, it is an oasis for these endangered creatures.

Another spunky animal found at Wolf Rock this month was Tin Can Bay resident Renae who completed her PADI open water course with dive instructor, Emily.

Not many people can say they have seen more than 20 sharks on a beginner training dive. We were stoked for Renae and look forward to showing her more of our underwater world! For information on starting your underwater adventures, contact us on 54868004.