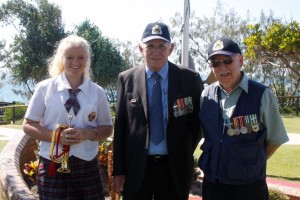 Thank you to those who attended the Vietnam Veteran’s Day ceremony on August 18. It is a special day when veterans remember their mates who never came home and those both gone since and those still present.

On September 3 the Sub Branch will fly a flag, a slightly different one to the one to which we are accustomed.

From 1901 to 1954 the Red Ensign was used as the national flag by state and local governments, private organizations and individuals.

In 1941 Prime Minister Robert Menzies stated there should be no restrictions on private citizens using the Blue Ensign on land, but it wasn’t until the passage of the Flags Act in 1953 that the restriction on civilians flying the blue was lifted. After that the use of the Red Ensign on land became a rarity.

Since 2008, September 3 has been officially commemorated as both National Flag/ Merchant Navy Day which allows the Red Ensign to be flown on land as a matter of protocol.

So on that day we will remember all those who endured exceptional hardships and sacrifices, many the ultimate, on the high seas as part of the defence effort of this country as unarmed civilians. Lest We Forget.