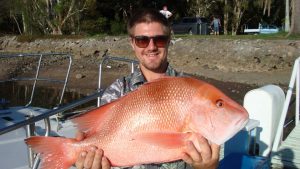 Another month flies past and along with it came a lot of bad weather; unfortunately the majority of weekend charters in May were cancelled due to rough conditions, which left a few trips getting shuffled around in hope of better conditions through the week.

A few trips out early in the month were a bit lumpy and we decided to try some closer-in reefs south towards Double Island, which allowed for a run back with the swell and wind.

The fishing was good, with all your general species caught, along with some nice pearl perch showing up.

Later in May during a few patches of calm weather we ventured further out and found the fishing to be slightly better still; a couple of trips with a large variety, good numbers and decent-sized fish including scarlet’s, red emperor, sweetlip, trout, pearl perch, quality size wrasse, parrot, Moses perch, tuna and the odd pelagic.

Overall, when we have been able to get out, the fishing has been good and on the improvement, let’s hope for some consistent good weather soon!

On the beaches a few dew have been showing up along with the start of the tailor run. Squid are in decent numbers in the straights and flathead still seem to be active – a short session flicking plastics on foot in the shallows last week produced around 30 and a few around that 60-70cm mark.

There has been a lot of tuna activity at Inskip Point for those looking for a bit of fun in smaller boats. ’Til next month.

The Rainbow Beach Family Fishing Classic is one of the few remaining successful fishing tournaments on the eastern seaboard. This major saltwater fishing event will be run in July, commencing Friday 21 to Saturday 29.

Round two of discounted ticket prices! If you didn’t get in on the first round for the awesome savings, now is your chance! The sale of these tickets ends July 1, 2017. Don’t miss out and save: www.rainbowbeachfishingclassic.com