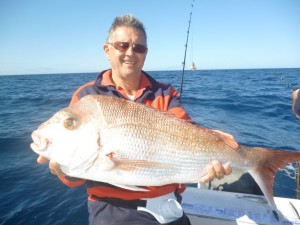 Lauchie with a quality snapper.

What a great rain we have just had, it has been a godsend to those out West. Even though we at the Coast can survive with little rain they certainly can’t inland. Let’s hope they get more this month.

We can do without the wind, and that has been the norm this month. The strong Southeasters have put paid to many charters over the last couple of weeks.

Fishing wide earlier in the month good numbers of snapper made an appearance, a little later than normal. Most being in the 2-3 kilo range with the odd 5kg fish.

Other main species out wide have been parrot, hussar, moses perch, pearl perch, with the odd sweetlip,red emperor and gold sot wrasse. 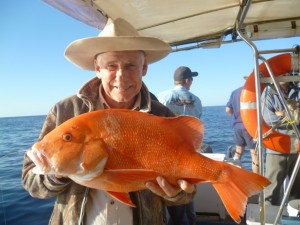 With six charters cancelled in a row, let’s hope there is better weather ahead.

‘Til next month, good fishing.