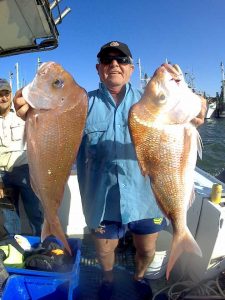 Rick and his family were treated with plenty of quality snapper in mixed bag on board Baitrunner.

Well, it’s been an up and down month with weather and unusual currents, and it seems like the storm season has made an early appearance and in a strong way.  The power of the ocean can be quite scary at times and unpredictable even to the most experienced.

However, storms like we had the other week are just frightening and out of anyone’s control, just driving along the Rainbow Beach road and seeing the destructive damage done to trees is a real eye-opener and we were lucky compared to many.

Okay, on the fishing scene we have managed quite a few trips out this month, some in close, some out wide and north and south, pretty much where the weather and currents have allowed us to go.

In on the closer reefs snapper are still about and we have been getting good numbers and size, just locating them is getting a little harder now.  Sweetlip, pearl perch, cod, cobia and the odd scarlet have also been active on the closer grounds.

Out wider has been producing great quality parrot, husser, Gold Spot wrass, Emperor and some jobfish.  It shouldn’t be long now till we start seeing the first of the Mahi Mahi getting about which always proves to be a lot of fun, well until they are in the boat anyway, then stand back, those guys go hard and don’t give up even once in the boat.

Till next time, I hope you all got through the storms unharmed, catch ya next month.