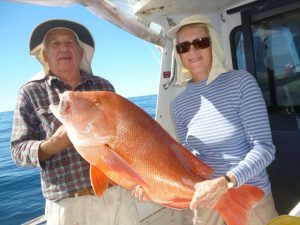 John and Beryl from Brissie with Beryl’s 14kg red emperor

Since last month’s report we have managed quite a few trips offshore and returned with some very good catches.

Snapper have now returned in good numbers, with a couple of bag outs already. Some snapper have been over 6kgs but most in the quality eating size of 2-4kgs.

Some decent red emperor have also come on board with the biggest at 14 kgs.

Quality pearl perch have also been landed but mainly from the inshore reefs.

Other species to make up our catches have included Moses perch, grass sweetlip, and gold spot cod; with hussar and parrot from the wider grounds.

Hopefully we have seen the last of the Southeasterlies for a while and we can get some settled weather for the remainder of winter.