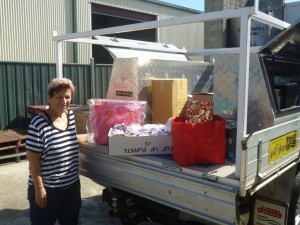 Tony Stewart has been loading his Ute with goods collected by Marilyn Dean. “This is our second big load of goods to go to Longreach, and hopefully not the last,” Tony told Community News.

The drought in Western Queensland has entered its fourth year and shows no sign of abating. State Government assistance has not been sufficient to provide relief to struggling farmers, and no stock and no water means no income.

“Many families will walk away with nothing. They can’t pay bills, some have committed suicide, and many are on suicide watch.”

The Drought Angels at Chinchilla and Aussie Helpers at Charleville are flat out coordinating supplies. From January 9, over 110 large semi trailer loads of hay, all of which has been donated from New South Wales with no fuel or labour costs to the drought stricken farmers.

“Many of these farming families have holidayed at Rainbow Beach over the years, and when good times return, I’m sure they will remember the help given from here and they will return. Thank you all.”