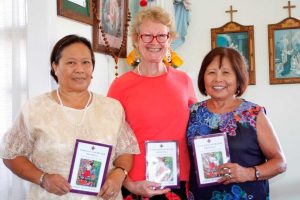 Members from the smallest church on the Cooloola Coast are thrilled to be hosting the 2017 World Day of Prayer.

Maggie Travers said, “There are seven Christian church groups on the Cooloola Coast, and it’s our turn this year.”

It is of special significance to the Catholic congregation of St John Vianney, as they have several members from the country in focus – the Philippines.

The Christian women of that country write a prayer service for all to share in. They reflect on their country, their lives and challenges.

Maggie introduces me to Adelaida Allars and Teresita (known as Tess) Moffatt who explain to us why their country of birth’s theme is “Am I Being Unfair to You?”

Adelaida is wearing her traditional Filipino wedding dress, and says, “We don’t get the dole over there. You have to find work to support your family. There’s not much work available and it’s not well paid.

“It’s a lot better in Australia. The salary for the same job is next to nothing in the Philippines.”

Tess agrees – and says this is the case even for domestic workers!

Adelaida says access to hospitals and medical care is also dire for the majority of the population, “They won’t treat you if you don’t have any money, and medication is expensive.”

They both love living on the Cooloola Coast, and the opportunities that exist here in Australia for women, but admit, “Just like here, domestic violence is there as well.”

We all agree, there is much to pray for across the globe.

So join three million people annually in over 170 countries, and celebrate unity in Christ and diversity in culture at the yearly common Day of Prayer.

You’ll hear from guest speaker, Mrs Rosalia Rode who grew up in Samoa, lived in New Zealand, and now lives in Cooloola Cove.

Maggie and Tess are very excited that the Coolabay Choir has agreed to sing at the event. Maybe it’s the promise of morning tea afterwards?

“Especially when Filipino cooks are involved!” Maggie agrees, “So it will be a feast.”

But you won’t need to fit in the quaint little church 10am Friday, March 3, as the day is held at Cathy House, 44 Toolara Road (corner Coral Trout and Toolara), Tin Can Bay.

Everyone on the Cooloola Coast is welcome to participate. For more information:
http://www.worlddayofprayeraustralia.org