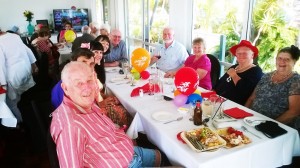 In November the thoughts of most Aussies turn to the races, so on Melbourne Cup Day the Over 60’s headed down to Carlo Point to Latitude 25, the new restaurant there to celebrate and perhaps have a flutter on a couple of the sweeps.

The warm up for the main event was the Rainbow Cup featuring the stable of neddies created by local artist Colleen Yallowley. Those who have attended Cup Day events in Rainbow will recognise these very colourful horses that have been the occasion of great fun on a number of previous occasions. 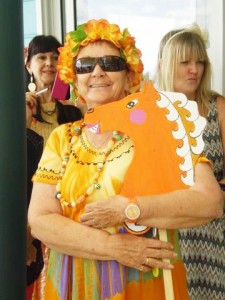 The Rainbow Cup was won by Betty Freeman, with her mount Darling Debbie. A great race was run by all. Winner of Fashions on the Field was Sandra Sykes who wore a very elegant rose fascinator.

Betty Freeman was also runner up in the fashion stakes. Sandra Kielly and Neci Berry both showed the golden touch in the sweeps, between them taking five wins!

It was truly a great day. The waters of the bay were blue, reflecting the clear skies and the white boats anchored just offshore and creating a relaxed and joyful atmosphere. We must do it again next year. 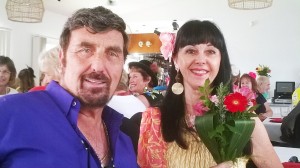 Be sure to come to our Christmas Party, on December 2 at the Surf Club, commencing at 11am.

January coffee at the Surf Club is on Tuesday 3, and the event for the month will be Morning Tea at Cooloola Bayside Park on December 20.

In February we are planning an early morning swim followed by breakfast at Jilarty’s.