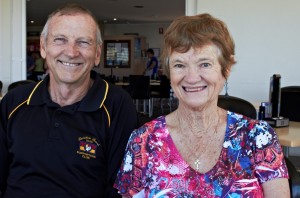 Ray and Margaret at our coffee morning, sharing tales of their recent world cruise

What a great little city our neighbour Maryborough is!   A group from the Over60’s spent a day there  during the recent annual Open House Weekend when 25 significant or historic buildings were open to the public.

Maryborough has a very interesting history, and our group has reported on it in the paper previously, but it is very interesting to note that during that period of intense migration into Australia in the second half of the 19th century, the port was second only to Sydney in the number of migrants entering the country through it.

Of the 25 really interesting buildings open to the public on Open House Weekend we were able to visit only a few.  We went through two very gracious homes, Baddow House and Stirling, which  have been restored to their former glory and are really works of art. 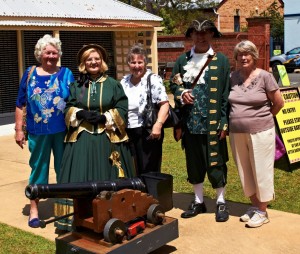 Margaret, Dorothy and Nola helping the town crier prepare the cannon for the midday firing.

Baddow House was built in 1882 by Edgar Aldridge who came as a pioneer in 1847, made his pile in the new town and then thirty or so years later built the very grand house as fitting tribute to his new wealth.  Stirling, also a beautifully restored mansion, dates from Maryborough’s thriving 1880s.

Olds Engine Shop, established in 1918,  is still producing specialised engineered products  and is highly respected in the industry.  Almost everyone in the group, men and women included, were intrigued by the tour of the building, and the variety of steam machines being demonstrated. 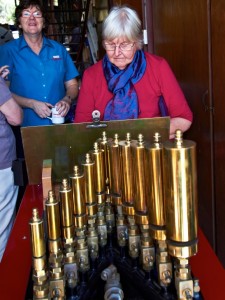 Brennan and Geraghty’s Store, established in 1865, another glimpse into the past,  still had items like curry powder and toilet paper from the 19th century on show.

At the Guides Hall, Helen who was with us, was chuffed to find a snap of her in her Guide Leader’s uniform dating from her youth. In all we had a pretty good day.

Diary dates are listed on the What’s On page.