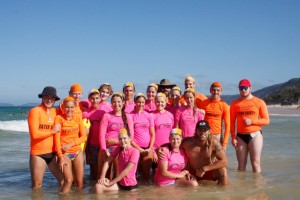 The successful recruits with their trainers and water safety helpers

Surf lifesaver, Shane Handy, helped train the new recruits and said it has been a good group – and the three males and eight females had conditions that were very favourable.

Some trainees are already on the roster and will be stepping up with their bronze medallions, while others will be starting patrol immediately.

More courses are available through the Surf Club right now. They include advanced resuscitation techniques and inflatable rescue boat for drivers or crew.

The next camp is scheduled for September for ages 13 and up.