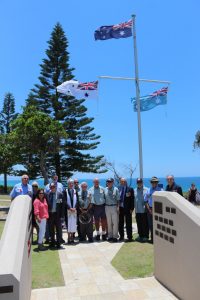 Remembrance Day Services were held across the Nation last month where veterans from all wars were honoured.

The 11th hour of the 11th day of the 11th month is significant as that is the day the ‘Great War’ World War 1 ended. At last the guns fell silent and rejoicing for so many around the world began.

The Rainbow Beach service was presided over by Rainbow Beach RSL President Joe Casey and the Prayer was delivered by Reverend Ingrid Busk.

The recital of the poem Flanders Fields was an integral part of the days ceremony as it was a major battle theatre during The Great War.

This poem written by Lt Colonel John McCrae, a Canadian Soldier, inspired the use of the Poppy which grew on Flanders Fields and became, and remains the enduring symbol of remembrance throughout the world.

That same poppy also flowers in Turkey in early spring, as it did when the Anzacs landed in Gallipoli in 1915,

The last post which signifies the end of life for the fallen now their duty is done was performed by bugler Jamie Lee Griffiths and was followed by silence. Reveille was then sounded which symbolizes the awakening of the dead to duty in a different place.

Wreaths were laid in memory of the fallen by:

Taken from an extract of Presidents Joe Caseys speech 11.11.19