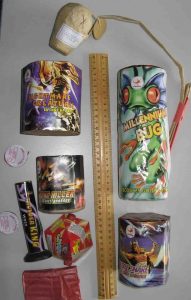 Illegal fireworks may result in prison

One Friday night last month I was sitting at home watching the footy, when a loud bang filled the air outside. This was soon followed by my dog, Molly, launching across the room and onto my lap.

For the next minute or so more loud explosions followed from the unlicensed display of fireworks occurring somewhere in town, while Molly tried to dig a tunnel under the coffee table.

Fireworks displays are a great source of entertainment when carried out by competent and licensed operators, however when ‘Joe Blow’ has a few beers and then ignites his illegally obtained fireworks – resulting in a rocket heading for your house or campsite – it’s not such a good experience.

Since 1972 the possession and use of fireworks in Queensland has been restricted to licensed operators, due to the extensive injuries and property damage that resulted from the unregulated use of these explosives.

In the Northern Territory there is one day each year (Territory Day) when it is legal to set off fireworks, and in 2019 on Territory Day, there were reportedly no ‘life threatening injuries’, 17 hospital presentations and 160 calls to the NT Fire and Rescue – this was described as a ‘reasonably good’ year.

There are good reasons it’s illegal to possess fireworks without a licence, and we will prosecute anyone we find with such items.

The illegal use of fireworks is an offence which carries a maximum penalty of $53,380 or six-months imprisonment.

A few years ago, I had a devastated tourist come to the beat office looking for his beloved dog – which had jumped the fence of his holiday house and run off into the bush after some illegal fireworks were let off in town.

Long story short, he found the dog a couple of days later, badly injured after it had been set upon by some wild dogs. His initial vet bill was already in the thousands of dollars.

So please do the right thing by yourself, your neighbours and the environment – leave the fireworks to the professionals.