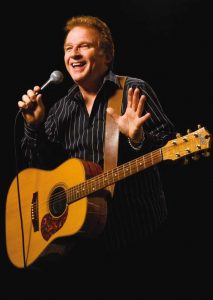 The Rainbow Beach events group and Tin Can Bay Lions have been busy finalising the fundraiser event set down for April 1 at our own Community Hall.

The star attraction for the evening will be Rodney Vincent with his high-energy Good Times Rock ‘n’ Roll Show. This will involve a variety of country, comedy, storytelling and rock ‘n’ roll.

Rodney has performed on live television and at major venues in Australia, including QPAC Brisbane, Burswood Casino Perth, Wrest Point and Crown Casino, the Gold Coast and Twin Towns.

With a packed calendar all year round, both here and overseas, he needs to be booked 12 months in advance.

Other artists Rodney has performed with include The Delltones, Col Elliott, The Four Kinsmen, and Freddie & the Dreamers, to name a few. The evening will include tributes to Johnny O’Keefe and Gene Pitney.

The night will kick off at 6.30pm with drinks, followed by a two-course meal. Silent and live auctions will take place during the night, with some wonderful gifts. You can also be in the running for a lucky door prize.

Pay online: BSB 084952 account no. 286707414 (Lions Club of Tin Can Bay Fundraising Account). Add your name for reference, receipts will be available.

If you want to purchase your own table of eight through your business, add $50  extra and you gain naming rights – you can add your business placard, plus your full donation for the evening will be tax deductible.

Guests for the evening are Natasha Johnson, who is one of the Drought Angels from Chinchilla, and Kate Stuart from a property west of Charleville, who will update everyone on the drought situation.

Another load will go out to Longreach at the end of February; if anyone wants to donate, please be in touch.