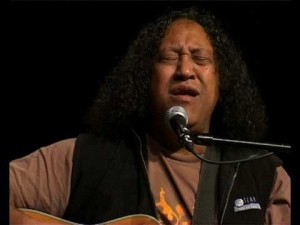 The Rainbow Beach Christian Community invites you to join them on Sunday 11 October at the Community Centre to hear Steve Apirana in concert. The concert will commence at 4pm and is free of charge, providing a great opportunity for locals to enjoy quality entertainment without having to travel out of town.

Steve is one of the finest Christian musicians currently working in Australasia and is a gifted communicator, highly skilled guitarist and vocalist, entertaining audiences with an extraordinary sense of humour as he tells his story as a former street kid, drug addict and solo dad. He has been playing in bands since the early seventies when he formed Butler, one of a few all-Maori rock bands, which became a household name playing to large audiences throughout New Zealand as support for Daddy Cool, Black Sabbath, Split Ends, and Dragon. In the eighties, Steve formed sixties spoof band, The Velvettes, playing till the early nineties before relocating to Australia. For three decades he has played solo and in bands all over the globe, equally at home on his Martin Acoustic as with a band on his Fender Strat.

Steve and his wife Ainslie live at Cooran where they reside in the old Post Office.

Steve has recorded five albums, with his latest album, “This Wretched Man” being the culmination of three years of recording, twenty years of writing and over thirty years of experience on the road. The songs reflect his faith, culture, personal convictions, and musical influences and come in various styles from ballad to blues, country to rock, and folk to soul. Steve will have CD’s for sale at the concert.