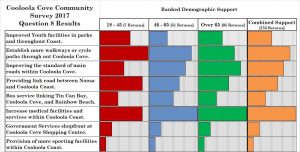 Summary of some results broken down by age of respondents

AGM Notice for CCR&F, which will be held October 16 at the Community and Veterans Hall, Cooloola Cove. Nominations for executive committee members to be received by the Secretary no later than October 2.

Nomination forms are available from the Secretary directly or via email, and forms can be sent to PO Box 103 Tin Can Bay QLD. 4580 or emailed to:  CCRNF103@bigpond.com

Cooloola Cove Residents and Friends sent a questionnaire out to the residents of Cooloola Cove (almost 1250 were issued). Again, I wish to thank all those who completed and returned the questionnaires (a total of 153 returned).

The first of three summaries is shown, with a chart indicating the priority of projects, per age group, (identified through our meetings) as returned.

Our next meeting will be on September 18, 10am, at the Community and Veterans Hall, Cooloola Cove. Please come along, new members are welcome to support the future of Cooloola Cove.