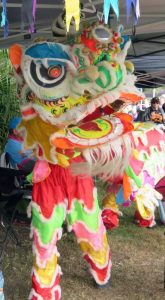 Organisers are keen to host the IRB Ocean Roar carnival in Rainbow Beach again
If you haven’t seen Dragon Boat Racing before, then do yourself a big favour

“No traffic, easy parking and there’s room on your beach,” is what I was told at the recent IRB Ocean Roar event – and one more thing: “and what a view!”

It seems the general consensus from the weekend was positive. Council bid for the event, our Surf Club got behind it and Surf Lifesaving Queensland (SLSQ) were all smiles.

Stuart Hogben Sports Manager from SLSQ said, “The Ocean Roar event at Rainbow Beach was a fantastic weekend. As the event organisers SLSQ could not be happier with the way the event ran and the support from Rainbow Beach SLSC.”

According to Stuart, their workforce was excellent with from set-up to pack up.

The food provided was just right, delicious breakfast burgers and tasty food during the day. There was no negative feedback from the officials, which is always a good sign!

“As a destination it worked perfectly,” said Stuart. “The clubs enjoyed the racing as it was a good, even beach to compete on and provided some of the best racing we have seen so far in this series.”

Stuart believes the different accommodation options in a location like Rainbow make it an attractive venue.

“Clubs and members can choose the type of accommodation that suits them best, from caravan parks, to rental houses, to apartments. Our members were spread across all types.”

The State Sport Officer was very impressed with the area and is trying to ascertain how to have a Surf Boat event at the beach, where you need approximately 200m of straight even sand.

“From SLSQ’s point of view, it will definitely sit very highly on our future venues for IRB carnivals – it’s a great location for this type of competition,” Stuart said.

After all the wonderful feedback on the IRB event from the SLSC and business owners, there are three more events to enter or watch on the coast!

Saturday July 29 will feature your local Cooloola Dragons competing in the final of the 2017 Wide Bay Series against 1770, Bundaberg and Hervey Bay, and Burnett River, so they need your support to come cheer them on.

Teams competing are from 1770 in the north to Tweed Heads in the south. There will be 300+ competitors, plus their family and friends enjoying our local hospitality.

Food and drinks are available on both days, and the Tin Can Bay Yacht Club deck and beer garden is the perfect place for you and the family to sit and watch the fun. For enquiries call Coach Sandra Wooster: 5486 2695

The same Sunday across the bay, experience the Rainbow Beach Trail Festival, the final race of the Run Queensland day/night series.

There are three different distances to choose from – 6am marathon, 7am half marathon and 11 km leaves at 8am.

All three races will go across the spectacular Carlo Sand Blow twice and the magnificent Great Sandy National Park. The half and full marathon trail goes past the beautiful Poona Lake.

With the full marathon you’ll enjoy Freshwater, Teewah Beach and climb up to the Double Island Point Lighthouse.

Spectators are most welcome; the event is staged at Phil Rogers Park (at the south end of Wide Bay Esplanade), where all runners start and finish.

Checkpoints at the Rainbow Beach Trail Festival, held Sunday July 30, will have water, electrolyte, some lollies, fruit and small snacks.

But Run Queensland no longer provide disposable cups at checkpoints.

They are committed to preserve the environments where they stage events, so urge participants carry their own cup for drinks they don’t want to put in their hydration pack or water bottle (coke, electrolyte).

The ‘no cup’ initiative has been a huge success since implementation in 2015 with the combined waste from checkpoints being greatly reduced.