Congratulations to all the Coast’s Year 12 graduates, we wish you all the best for your 2017 and your careers ahead! 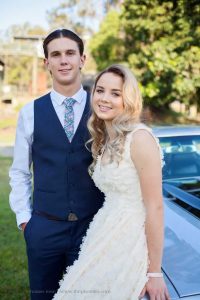 I had a great time this year as the James Nash school captain. Throughout the year I have been involved in numerous sporting teams, such as the wide bay surfing team, and captaining the James Nash rugby union team that also competed in the Queensland country cup in Toowoomba, just to name a few.

For next year I have secured an apprenticeship with Ergon Energy as the new ‘electro technology electrician’ based in Maryborough, starting in early Feb. Alex is pictured with Talija Smith Image Joanne Rose 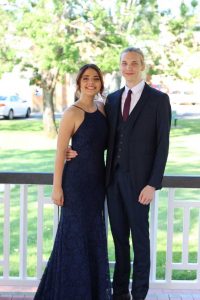 Alexandra Domingue, along with her partner Adam Lilley, graduated from St Patrick’s College. Mum and step-dad, Geraldine and Mark Little, said Alexandra will be studying a Bachelor of Nursing Science at the University of Sunshine Coast.

Once completed, she hopes to work in paediatric nursing and also do volunteer work overseas. She currently works at the IGA – Tin Can Bay. 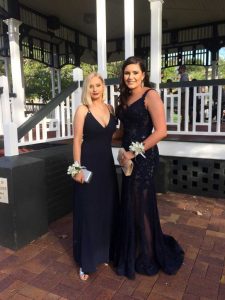 Bliss says she is staying here for the holidays to continue her work waitressing at the Rainbow Beach Sports Club. Bliss is hoping to move to Brisbane to pursue her study in health. “I’ve been interested in nursing for a while,” said Bliss. Well done, Bliss!

Lily is aiming to secure a position as a dental technician for her career. Lily achieved a silver and a bronze award for touch football, and her team made Top 8 in Queensland. Her plan for after school is to be a dental hygienist.

After working at a Gympie pharmacy, Lily is now looking for a job on the Sunshine Coast, and moving near Noosa to complete a Certificate 3 in dental assisting for 14 months. The plan is then to attend Griffith University at the Gold Coast to study oral health. 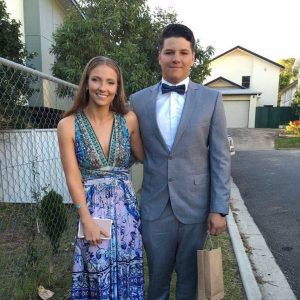 After six years at St Joseph’s Nudgee College as a Boarder Buddy, Modin is finally hanging up his blazer. During his time at Nudgee, Buddy has grown into an amazing young man with a strong but kind heart and a great work ethic. Buddy has made lifelong friends of both fellow students and teachers.

Academically Buddy has achieved personal bests in his final years of study. Due to these achievements Buddy has been accepted into Bond University to undertake a Bachelor of Commerce or Business, hoping to one day have a career as a forensic accountant or a stockbroker. 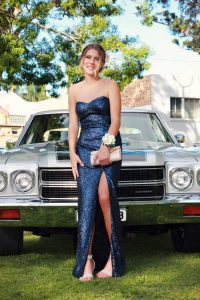 Courtney has been accepted at university to complete a Bachelor of Paramedic Science, although is considering working next year in Rainbow Beach or Western Queensland, whilst continuing to be a part of the Rainbow Beach Surf Life Saving Club and enjoying her other passions, touch football, surfing and horse riding. 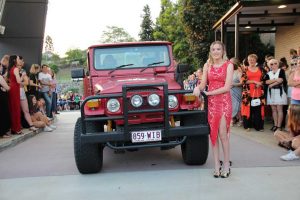 She says, “My plan for next year is to get enough money so I can move to Melbourne and start my journey around the world with my friend.”

“I feel this will help me achieve my future goals.”

Proud parents Scott and Kylie Ladner, from Cooloola Coast Refrigeration, will have an extra helper for the next six months.

The St Patrick’s College graduate is hoping for a career in Sports Science and is pictured with Formal partner Baleigh Campbell. 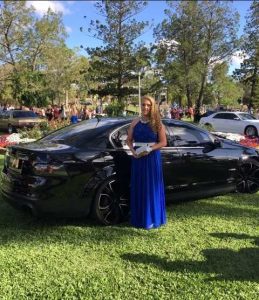 After Grade 7 at RBSS, Jemma-Leigh attended Gympie High School and achieved a Certificate III in hospitality. She has been working at the Surf Club for the last two years, plans a gap year, and then hopes to do a Vet Nurse course in Brisbane, and travel too! 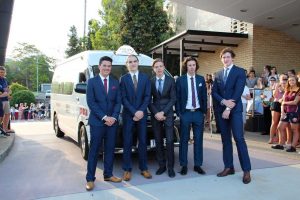 Harry and Felix did most of their primary school at Rainbow Beach. They have been close mates with Kale and Tristan since Year 8 at St Patrick’s College and playing football together. Some are hoping to share a house and study at the Sunshine Coast University in 2017.

Rainbow Beach local Harry is planning a gap year working locally, to investigate further, and then plan his more long-term options for his working life. 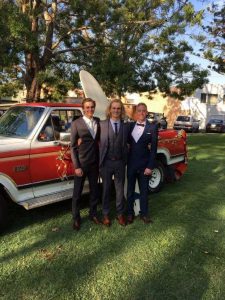 Liam received the St Patrick’s College Bryan Baker Memorial Award for displaying the kind and loving nature of a past principal, Bryan Baker.

He says “I’m planning on working next year somewhere on the Sunshine Coast or closer to home and then after that I’d like to study physiotherapy.”

Liam said he has applied everywhere but is hoping for University of Queensland in Brisbane. Liam is pictured (centre) with friends,  Jordan Brown and Willis Lovell.

Parents Brad and Tracey are delighted that Remy was accepted into USC Bachelor of Nursing Science through their Early Entry Program. Having just finished at Rainbow Beach Pharmacy, Remy is now working at the Surf Club.

You’ll also see her on the beach as a Surf Lifesaver and Volunteer Age Manager for Nippers. Here she is pictured with Formal partner, Josh Kelly. 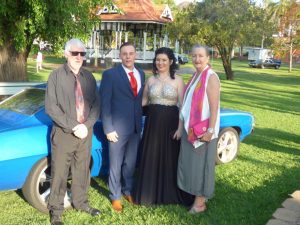 Sam finished on a high after a hard year of work as the Student Representative Council President at James Nash High and was awarded a cultural and citizenship distinction.

Sam has applied to the Queensland University of Technology to achieve a Doctorate of Sports Medicine and Physiology. She plans to move to Brisbane and continue a passion for cello as a hobby.

At Gympie High School Shaleigh completed a cert 3 in hospitality in a school-based traineeship.

Still deciding on her future, she is planning a gap year continuing work with her jobs at the Cooloola Pharmacy and the Tin Can Bay Yacht Club. 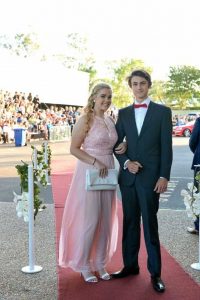 Graduating from James Nash High School, William is planning to work hard at Golden Breed in Rainbow Beach. “I’ll be saving up to go see my Oma and Opa in Switzerland,” William says. He would like to live there for a few months.

He has a great plan mapped out, “Then the year after next, I’m hoping to do the Australian Defence Force Gap Year Program and then looking for an apprenticeship or uni course if at that stage I have a better idea of what I’m doing.” William is pictured with Casey Pilkington.