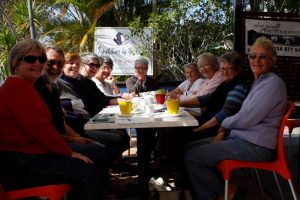 The Camera Club committee caught up at Crab Creek last month! please crop as much of signage from here and lighten

Members of Tin Can Bay Camera Club met last month for the judging of the August Print Competition and the announcement of the winners of the Interclub Safari. The guest judge for the print competition was local photographer Ken Ferguson.

In A Grade, the Honours was awarded to Ron Johnson (Rob). Merits were awarded to Louise Smith (Nicholas and The Canvas Worker) and Highly Commended was awarded to Jenni Bourke (The Coal Miner).

The club’s next meeting and competition judging night will be held September 21 at TCB Library, commencing at 7pm. The print comp subject is “Horses/Horses in Action”.

The club’s next Photoshop workshop will be held September 19 in the TCB Library meeting room, commencing at 1pm.

Ten club members will be participating in the Club’s annual Photography Retreat which will be held on the Sunshine Coast from September 12 to 16. This is a great opportunity for members to immerse themselves in photography, visiting a wide variety of locations to photograph an equally wide variety of subjects.

For more information and to view club members’ images, visit the club’s website at www.tincanbaycameraclub.wix.com/tcb-camera-club.