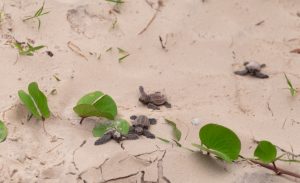 Of the 143 eggs found at the bottom of the nest, 138 of them left the nest successfully

Cooloola Coastcare President, Randy Orwin, received a text message from Dean Bergin, one of the TurtleCare volunteers in February with an image of a turtle nest that had hatched and the bay turtle had run to the water.

Unfortunately, he was a bit too late to see the hatchlings run across the beach, but the tracks were all the proof needed to know that the nest “ran”.

The only saving grace was that the sand was damp and the tracks were only about 70mm deep. If the sand would have been soft, it is likely that these hatchlings would not have made it to the water.

Now that the hatchlings are running, this means that the volunteers that have been certified to “dig nests”, go to work digging out each nest after it has run to check the success of the nest, meaning how many turtles hatched and made it out of the nest.

This process entails finding the egg chamber and digging down to gently remove all of the egg shells, unhatched eggs, dead hatchlings and often times, live hatchlings that got stuck in the nest and couldn’t get out.

Three of the four nests that have run have been dug, all with a success rate of over 90%. The nest dug that night was 94cm deep and contained 143 eggs for a 96% success rate! Nests will continue to hatch until early April.