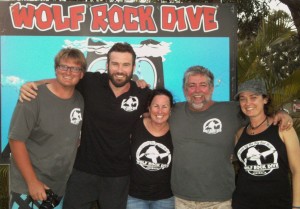 The last month has been a busy one for both recreational charters and our commercial diving area.

The grey nurse sharks have been all males with the last of the pregnant girls leaving for the birth of pups.

We had Clive Standen and his lovely wife Francesca join us for a day of diving a few weeks ago. Clive was in Australia to promote the hit series Vikings, in which he stars as Rollo.

Both Clive and Francesca are passionate divers and we had perfect conditions on the day to show them around Wolf Rock.

They have left Rainbow Beach now for Sydney and then on to Los Angeles for further promotion of Vikings, and will be spreading the word about what a great spot Wolf Rock is to dive and the lovely beachside town of Rainbow Beach.

Rainbow Beach found itself in the spotlight when a huge sinkhole/coastal erosion dramatically developed within minutes at Inskip Point.

A few days after the incident we were called for the not-so-pleasurable task of investigating what was salvageable after people tragically lost their car and caravan.

Unbelievably, all that was exposed above the sea bed was the back end of the chassis from the caravan. It is hard to comprehend that a whole car and most of a van can be swallowed up so quickly.

The sandy bottom was just a maze of trees and debris and the sand itself was so soft it was like quicksand.. To see some underwater footage of what we saw you can go to our Facebook Page or Youtube.

Visibility at Wolf Rock has been averaging 10 – 15 metres and water temperature is warming, currently 20 – 21 degrees.