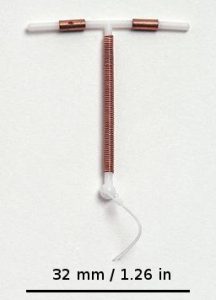 This is a PSA for anyone who could get pregnant but doesn’t want to.

You probably already know there are lots of different methods of avoiding pregnancy.

One thing a lot of people don’t know about is the most effective form of emergency contraception – something you can do after sex if you think you could be at risk of pregnancy (you’ve missed pills, the condom broke, your partner pulled out but you’re not sure if it was in time… whatever…).

*** Getting a copper IUD inserted (they’re the plastic framed ones with copper coiled around it) within five days of unprotected sex is very, very likely to work***

The emergency contraceptive pill (it’s not just for the morning after – it can be used for 4, and even 5 days after) is easier to get. Any chemist in Australia should be able to supply it. No need for a doctor’s prescription.

There are two kinds and they’re roughly equivalent. They work by delaying ovulation (releasing an egg from your ovary), giving the sperm a chance to disintegrate before your egg is around. But if you’re on the verge of ovulating or have just ovulated, they won’t put it back and they can’t stop implantation if fertilisation does take place.

Taking it in the fertile window (it’s hard to know whether or not ovulation will have already happened, but this is from the 5 days before to 1 day after expected ovulation) gives a 32-40% failure rate. Worth getting, because much better than crossing fingers….

The copper IUD can work whether or not you’ve ovulated. Inserted within 5 days of unprotected sex, if you’re not already pregnant/at risk of pregnancy, it’s highly likely to work, with a failure rate of a few in a thousand or even lower.

It’s dearer than the emergency pill, and not as easy to arrange: you might need to phone around to find a doctor/women’s health/family planning/abortion clinic to fit you in and insert it. It’s uncomfortable or painful to get inserted (ask for anaesthetic spray). But it’ll most probably work.

Then you can either get it taken out once the scare is over and you’ve had your period or your negative pregnancy test…. or leave it in for a few months to see if it suits you…. and up to ten years if you like it and want to keep using it.

(Although it can’t affect your mood or skin or weight or sex drive, won’t interfere with any medications and doesn’t increase your risk of heart attack, blood clot, stroke or migraine, there’s a 50-50 chance it will make your periods longer, heavier or more painful, or some combination of those three.)

If you didn’t know this, and have friends you think would benefit from this knowledge, feel free to share.

Kamala is a GP who has worked in family planning and similar services for over 20 years in Brisbane, NSW and WA.