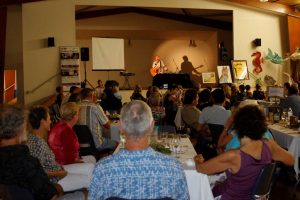 Tony Stewart and the Rainbow Beach Events Group deserve resounding applause for a spectacular Bush to the Beach Fundraiser.

The group was formed from Rainbow Beach Commerce and Tourism Members working under the auspices of the Tin Can Bay Lions Club.

“We would like to thank all sponsors and helpers for their wonderful contribution in making
the night such a success,” said Tony.

He said it would not have been possible without the 145 people who all who purchased tickets.

“We trust you all had an enjoyable night. It would be remiss of me not to mention Marlene Owens’ contribution, with some of her ideas it made the event easier to run.”

The Gympie Region’s 2016 Citizen of the Year, Marlene ” foot slogged” with Tony for many miles around Gympie looking for support.

It certainly paid off – the many auction prizes, silent auctions and raffles were all very popular (Marcia, you really deserve a wonderful holiday at Fraser Island Beach Houses).

Marlene’s friends decorated the Hall and helped on the night – included was Dulcie Dyne (whose late husband Mayor Ron Dyne was the driving force behind Rainbow Beach owning our Community Hall for all to enjoy).

The meal was delicious and the dance floor was busy! Tony said the young helpers did a wonderful job on the table clearing and wash up.

Performer Rodney Vincent sent a big thank you for the night and said it was a wonderful community effort.

“Now I must let you know our total amount raised will be over $15,000 after all expenses paid.”

It means they we can bring a group of Western Queensland kids, who deserve an adventure away from the drought, to the Cooloola Coast.

These 30-40 children will be housed at Cathy House in Tin Can Bay for a week and it is hoped to get them to Australia Zoo, Underwater World, and our local attractions like dolphin feeding. We have been offered boat rides from TCBay and maybe kayaking to see the whales.

“We are open to any other suggestions for their entertainment, like meeting the children from our school and having a BBQ with the community.”