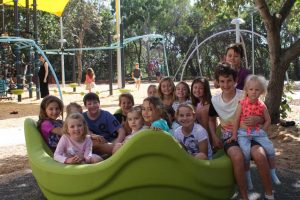 Besides a visit from actor Chris Hemsworth, the big news on the street for little people is the newly upgraded Lawrie Hanson Park at Rainbow Beach. They have been chomping at the bit to get through the construction fence.

After the school bell blew for the holidays, the playground was finally open – and parents delighted they didn’t have to field anymore “how much longer?” questions.

Said dad Ziggy Sigel. “I’m really impressed with the design, it blends in with the natural beauty.”

The playground uses more space on the headland , so the view to the ocean has also been expanded.

“Being here is already nice, parents get to hang out in a place of beauty while kids play. It’s spread out – it’s great that kids have to run between locations.”

Mayor Mick Curran said, “We are really pleased to have been able to complete the first stage in time for the school holidays and know that the community and visitors to the area will be thrilled with the park’s facilities.”

“These contemporary upgrades to the facilities will ensure the park is now a destination in its own right for visitors with young families.” he said.

Stage 1 and 2 which are now complete include not only the new playground but new public amenities, two new shelters and furniture, a new double plate bbq, new pedestrian footpaths and lighting to the playground, shelters and pathways.

Some parts of the park will be fenced off during the school holidays to protect the newly laid turf and prevent access to uncompleted areas of improvements.

Following end of NSW school holidays, works will restart on the remainder of the project, including the demolition of the old public toilets and completion of landscaping and paths in this building’s vicinity.

“I last wrote to the Department of Resources and Mines in April and they have just written back informing me due diligence had been undertaken. As per the Queensland Government Land Transaction Policy the subject land will go on the open market then. They will advise once the parcel of land goes on the market.”

Meanwhile, the Mill Site revitalisation continues. A DNRM spokesperson has advised the Community News that the Department of Natural Resources and Mines (DNRM) has engaged Green Coast Resources to remove mineral sand stockpiles from the former mineral sand processing site at Rainbow Beach.

They say the project is ongoing and progressing well, and weather permitting we anticipate work will be complete later this year.

Further works are happening at either end of the main street – Rainbow Beach Tackle and  Camping Disposal will have a whole new building and the café at Sea Salt @ Rainbow is underway. A QAS spokesperson has advised works are well progressed for the new Ambulance Station in Rainbow Beach with practical completion scheduled last week, the station is likely to become operational in July.