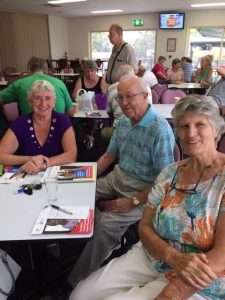 Jo, Arthur, Katrina at the My Aged Care talk with Probus.

PROBUS is made up of two words, “Professional” and “Business”, and was set up originally by the Rotary Club in England for the benefit of retiring Rotarians who were looking for a club where they could meet and mix for social events and mental stimulus. Since those early days Probus has expanded to the Philippines, New Zealand and Australia.

Probus is now open to all retirees and semi-retirees. Each club is autonomous but carries on under the general guidelines set down by Probus South Pacific Limited.

Each club engages in a variety of activities for the benefit of members, whether it be lunch at a local venue or attending community events, such as the recent meeting conducted by the Public Health Network. The photo shows three of our members (Jo Said, Arthur Leggo and Katrina van den Brenk) attending this event.