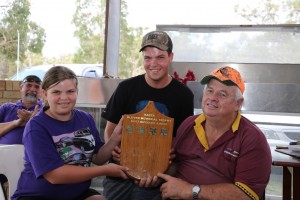 Another very busy year has gone again, and we’re already into the second month of 2016.

We had 25 shooters lined up for two days of competition, and congratulations to the members of Tin Can Bay who won medals: Gordon MacRae, Brian Leach, Scott Dean, and our juniors Jack Martin (his first time and shooting a borrowed air rifle, he won a silver medal), and special mention for Natasha Lee (also first time and using a club rifle, who won 4 medals).

Congratulations also to our other members who have competed during the year and scored State medals for pistol and rifle shooting.

The “Bazza Cluver” trophy for most improved junior shooter was divided into two categories last year; Over 15 years and Under 15 years.

The trophy is not awarded every year, but must be earned by the juniors who attend for the whole year and make great improvement in scores and dedication to the sport.

The Over 15 winner was Jack Martin, and Under 15 was Eliza Martin. Both of these young people thoroughly earned their names on the trophy.

SSAA Tin Can Bay has already begun regular competitions for shooting and archery, and a calendar of events is available.

Safety courses for those who wish to gain a shooters licence are also held on a regular basis.