…” but today Greg Mcilroy can boast about a small one. This ‘micro Black Marlin’ had a short length of just over 70cm and weighed about 2kg. The fish was kept for research and according to Dr Julian Pepperell is the second smallest one he’s had from the East Coast of Australia.” said Double Island Point Fishing Charter owner, Greg Pearce. 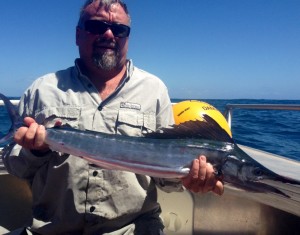 The catch was a surprise for Greg too, “I have never seen one in the flesh as near as small.” He said normally a small Marlin is around 6-7 kg!”

Greg had no idea how keen Dr Pepperell would be to acquire it.”I  didn’t realise how much of a stir it would create – he was prepared to drive from Coffs to Rainbow and back to pick up.”

So why all the fuss?

Dr Pepperell told the Community News that the catch was unusual, “The weird thing about baby Marlin, is that theoretically there are hundreds and thousands of them.  Big females (500-600kg in weight) release hundreds of millions of eggs each year and yet baby Marlin are very rarely caught by commercial or recreational fisherman and we don’t know why.”

“I’ve been studying Marlin for 35 years, it’s one of those great mysteries why we don’t see them more often. This is the smallest one in our study  and I have seen two smaller in my career,  only held one and  seen a photo of another.”

It could be that lures are too big for these creatures, or that they simple don’t stay little for long, growing out of that “dangerous period when every thing wants to eat it.”

“Marlin are a pinnacle fish, this iconic species have  a great reputation and significance, with 99% tagged and released. As an apex predator, they grow incredibly quickly – the fastest growers in the ocean – it would reach a weight of 25kg in one year!”

They are also the fastest in the ocean. Dr Pepperell said their  streamlined body is built for phenomenal speed with fins that fold down, they can swim underwater for70 to 80km per hour in short bursts.

Black Marlin are known for their extensive migration. “Over 50,000 have been tagged by Australian anglers  with locations reported to NSW fisheries. Over years, they have been shown to move extraordinary distances – even across the Pacific Ocean.”

“One quite small Marlin was tagged off Cairns (only 15kg) was recaptured by a commercial fisherman off Costa Rica. Many more have been found in Papua New Guinea, Fiji, Samoa and Hawaii, but interestingly  the big adults come back to Great Barrier Reef to spawn.”

The Marlin will be assessed for its genetics and growth rate. Greg said it was so significant that that it may be flown to Hawaii to get it aged.

Dr Pepperell said “We  age fish usually at the earbones, or’ otoliths’. In baby Marlins they are the size of a pin head, and etching with acid reveals bands under a high powered microscope. These daily rings are counted to see how long they have been alive. We expect it to be 2 to 3 months old, but would like to confirm.”

So why the interest with the baby Marlin from a science point of view? Dr Pepperell explained.

He is supervising research at the University of Queensland on the genetics and stock structure of black Marlin. With the refined genetic techniques now available they are able to compare DNA  from stocks in Eastern and Western Australia to see if they are separated or mixing. Dr Pepperell says that if all of these highly migratory fish are interrelated,  we in Australia need to be involved in global management, not just us our patch – hence the worldwide interest.

“Juvenile black Marlin haven’t had a chance to move big distances and their DNA tells researchers about local stocks, as adult fish could have travelled from somewhere else.”

Hundreds of juvenile black marlin are clipped and released  – in a successful scheme with game fishing clubs competing to see who can secure the most clips of dorsal fin.

This little fish was sacrificed for science, but hopefully he has a big story to tell us, with an impact on global management of his species.