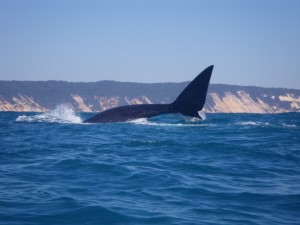 Up close and personal – on an Epic Ocean Adventure kayaking tour

Humpback whales are currently making their return journey at the end of the migration season.

Tyron van Santen from Epic Ocean Adventure Tours said, “They finish coming past at the end of November. The numbers are increasing greatly – they say by 7% in the last five years.”

He said, “It’s great to see and we have a good clientele that come to Rainbow especially for the kayaking tour every year. We had a mother and calf swim under us a couple of days ago, you can see it on our facebook page.”

Rainbow Beach was in the spotlight last month when a the Queensland Boating and Fisheries Patrol’s Marine Animal Release Team successfully freed a juvenile whale from our shark nets last month.

“The Marine Animal Release Team was activated after a whale entanglement was reported by the government shark contractor this morning,” Mr Krause said.

“Sea conditions were very good and this enabled the team to cut the ropes off.

“Throughout the release the whale was relatively calm and was near the surface, which meant it could breathe easily.”

Her mother stayed close by whilst rescuers worked, a demonstration of the whale’s enormous maternal bond.

This is only the eighth whale this migration season to be caught in shark control equipment in Queensland.

Locals report only two whales have become caught on the Rainbow Beach nets in over a  decade.

Anyone who spots a whale or other marine animal tangled in the shark control program equipment should call the 24-hour Shark Hotline on 1800 806 891. For more information: www.fisheries.qld.gov.au