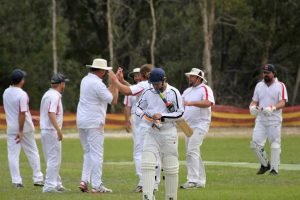 All are invited to the Rainbow Beach Cricket Club inaugural AGM on Sunday 7pm, June 5

Merv O’Neill invites you to the first AGM for the newly formed Rainbow Beach Cricket Club on Sunday 7pm, June 5 at the Sports Club.

“After a really good first year, the support we received every Saturday was the biggest in the whole competition.

“Every team that came here was amazed – they’d struggled to get a scorer! On our away matches we’d bring a scorer, and a volunteer umpire. Here we have the spectators on the hill, and 20 or 30 kids running around – it was sensational! Kids everywhere!” Merv smiles, as the group encourage kids to come along to training also.

However for the only sporting ground in town, conditions aren’t the best. The group, with support of school principal Michael Grogan, have had two visits from council, but nothing yet has eventuated. They want to improve the facility for the club and for school.

The season starts in September, kicking off with an away game against Tin Can Bay – the first clash in the hotly contested Rainbow Beach Cooloola Coast Community News Cricket Cup!