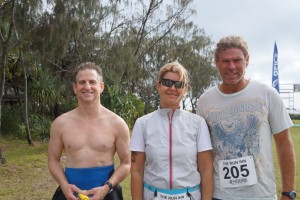 Despite the threat of rain, by lunchtime on Saturday the weather conditions had settled, and the triathlon proceeded in overcast but fine weather. Saturday events were turned into a duathlon, with the water conditions on the beach being too difficult for the swim leg.

Instead, competitors completed a run/bike/run course. Active Kids and Active First Timers started from the finish line, completing their first run heading down to transition before their bike and a second run course.

The first half of the ‘Double Triathlon’ became a 2.5km run, followed by the 20km bike course to Inskip Course, then a second 2.5km run.

Competitors enjoyed the opportunity to break up the run leg, particularly with the challenging hills. Very fast run times were lodged by many of the competitors.

Matthew led at the end of the first run leg, but a strong bike leg by Tayte gave him an unsurmountable lead heading into the second run leg.

In the females, Jennifer Veitch from Red Dog Triathlon Club in Brisbane won the Saturday race, with Savannah Wayner from Sunshine Coast Triathlon Academy a small distance behind in second.

In Sunday’s event, with Matthew not racing, Tayte led from the start, showing his dominance as one of the leading junior athletes in Australia. He won convincingly, showing he is in great form.

In the females, a strong bike leg gave Savannah Wayner an unbeatable lead heading out onto the tough run course. Savannah took the win, with a convincing lead from second placed teammate, Romy Wolstencroft, both from Sunshine Coast Triathlon Academy.

The interclub challenge, fondly known as the ‘Wide Bay World Championships’, was this year won by Team Coral Coast, based in Bundaberg with 307 points. Last year’s winners, Team Fraser Coast, from Hervey Bay and Maryborough came in second on 272 points.

And how did the locals fare? See the photos below and more images on: www.facebook.com/RainbowBeachCommunityNews