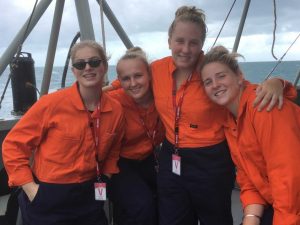 “It was awesome, a great experience to see where they all live and everyday life on a base in a ship,” Jasmin said.

Fourteen young Queensland women experienced life at sea onboard HMAS Melville, and Jasmin was inspired by her time there.

“I’d like to be a submariner medic – being in a submarine you do a bit of everything – marine technicians, electronic technicians – because it is such a small crew.”

“I’ve been to a few of their talks: Maroochydore on submarines and Maryborough on forces in general. I’ve seen them at school and to the recruitment centre to talk about subjects.”

Jasmin has already applied for the next work experience in Sydney, which focuses on maritime warfare and officer roles, as well offering time on a different base.

And what would Jasmin say to other teens interested in a Defence job?

“Definitely try a work experience – you see life and their fitness regime – it could really show you a different career that you wouldn’t normally think about.”