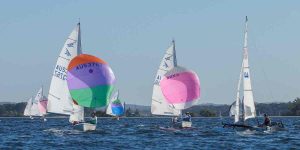 The Tin Can Bay Yacht Club is hosting the 2022 Cooloola Cup Regatta on 23 and 24 April. As last year, the Cup will be proudly sponsored by Century 21 and local businesses.

The inaugural Cooloola Cup was held between Christmas and New Year 1981 and was the first major event of the newly formed TCB Yacht Club. It consisted of 4 days of racing including a race to Mineral Sands Jetty, Fraser Island for an overnight stay and racing back the following day.

There were 15 yachts in the regatta with some famous ocean racers, Siska 11, Cadence, and Odyssey, a Hobart winner.

Over time, the format of the Cup has changed. The regatta weekend now includes the Cockroach Cup and is open to “off the beach” monohull dinghies and multihulls, sports boats, trailer sailers, and keel boats.

Last year saw 27 entries with the popular Weta multihull forming half of these.

The Yacht Club is hoping for an even bigger and better fleet this year and of course, fair winds and weather.