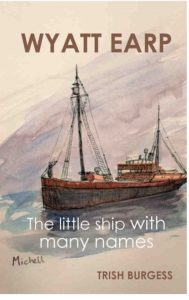 The book, Wyatt Earp: The little ship with many names, will be released by publisher Connor Court in mid May

The Natone Shipwreck is part of Rainbow Beach’s history. Lee McCarthy talks to Trish Burgess who has written about this world travelling ship.

Inspired by celebrations in Hobart last year to mark 100 years since Wyatt Earp was built and 60 years since she was wrecked on Mudlo Rocks near Rainbow Beach, Trish Burgess decided to find out more about her history.

Trish’s book, Wyatt Earp: The little ship with many names, will be released by publisher Connor Court in mid May.

Trish said “This book brings together the whole story of Wyatt Earp‘s many lives: her 1919 launch as M/S Fanefjord in Norway, through her four Wyatt Earp Antarctic voyages with American Lincoln Ellsworth and Australian Sir Hubert Wilkins; her time with the Australian Government and service as HMAS Wyatt Earp on the first Australian National Antarctic Research Expedition (ANARE) voyage.

“Finally as Wongala and then Natone it tells of her work around the Australian coast and her grounding and final resting place on Rainbow Beach in 1959.”

Growing up in a family with lots of Antarctic links meant Trish heard many stories about the men and the ships of the icy South. Her grandfather was manager of Williamstown Dockyard in Melbourne, from 1928 to 1938.

Royal Australian Navy hydrographers used offices in the manager’s house when surveying in Port Phillip Bay, and Karl Oom, who sailed with Sir Douglas Mawson and later became Captain of HMAS Wyatt Earp, was one of these and a family friend.

Discovery II spent time in Williamstown before and after the rescue of Lincoln Ellsworth in the Ross Sea. Trish has made four trips, on small expedition ships, to the Antarctic – two from Ushuaia, to the Antarctic Peninsula and South Georgia, and two to the Ross Sea from New Zealand and Australia.

Trish said that she already had an interest in Antarctic history and research and so it seemed a good idea to find out more about Wyatt Earp.

“There are plenty of accounts of various parts of Wyatt Earp‘s life but nothing that brings them all together and that was my aim.

“She had an amazing life, sailing through some of the roughest and coldest seas in the world but ending up on a Queensland beach!”

You can order a copy directly from the publisher, Connor Court. Just google Trish Burgess Wyatt Earp, or ask your local bookshop to get a copy for you.